Bear with me here, folks…

I haven’t really ever spoken about food or nutrition on here (other than the odd cake picture), and for good reason. I feel I have nothing to offer. I really, really enjoy eating out and have a to-visit list as long as my arm of ‘London food spots’ that just keeps on growing. But when it comes to feeding myself, I’m pretty rubbish.

When I lived with my (evil) ex, meal planning and food shopping was easy. We planned the meals we were going to eat each week based around where we were going to be. It’s a lot easier cooking for two – it’s more likely someone’s going to be at home to prepare food and it’s just plain simpler to cook double portion sizes. Prior to that, I lived with my best friend Clare for four years and we cooked everything together – doing regular Ocado shops was the norm. So, in short, until the beginning of this year I hadn’t really had to cook solo on a daily basis since I was at university.

Since January, I’ve had two food phases – the not eating phase and the eating everything phase. One coincided with the break up from aforementioned (evil) ex (at the time, Steph and Cara had to remind me to actually eat dinner… thanks guys!) and the other with marathon training. I am not in either of those places right now, so my diet doesn’t need to be either.

Since running the marathon eight weeks ago, I’ve gained a stone in weight. I’m not complaining about that per se, in fact it probably needed to happen. What I’m unhappy about is how it has happened and how it has made me FEEL. I’ve gained it through cake, chips, cocktails and chocolate. A LOT of chocolate. My marathon appetite has in no way abated and at the same time, I seem to have developed an insatiable sweet tooth. I can’t carry on this way.

I can’t put my finger on what it is exactly, but what I am eating at the moment just isn’t doing it for me. I’ve had several instances recently where I’ve experienced massive, shaky-handed sugar crashes. The kind where you feel you need to eat something because you’re shaking, but you’re in no way hungry. I can’t get through an afternoon in the office with a root through my snack drawer or a trip upstairs to the café. Every night when I get home from work I snack through dinner decision making and preparation. This could well be normal for a lot of people, but I am bored of it.

So, I’m doing something drastic. I’m doing something that every time I’ve ever looked at it in the past, I’ve thought is ridiculous. I’m taking on a massive challenge – I’m going to do my first Whole30. (You can read the short-ish version of what this means here.)

This came about thanks to Ashley’s post featuring her sister-in-law Meg, who had been following a Paleo diet (by the way, I really hate the word ‘diet’ – it has so many negative connotations. I literally mean “the kind of foods that a person habitually eats”). I looked at her ‘FML Diet’ list and thought it looked doable. Then I remembered the Whole30. Leah is currently on her fourth round and has nothing but praise for it’s benefits. I re-read a load of the posts on her blog, then I text her saying I was thinking about it. Her immediate encouragement and enthusiasm planted the seed further.

Sure, there’s things about it I am VERY sceptical of, and sure, it’s VERY American and VERY preppy (just read this post from a British Whole30-er on the amusing differences between UK and US restaurant service), but I still want to give it a go. I’m generally an all or nothing kind of person with things like this (I gave up alcohol for about three months before my first half), and once I’ve decided I want to do something, it’s usually too late to be dissuaded.

There are some things I really like about the idea of the Whole30:

So friends, family, blog readers, coworkers and all round lovely people of the internet, here are my things I’d like you to know (because it’s going to be hard enough surviving without brownie, gin and muesli for a month as it is):

I AM NOT DOING THIS TO LOSE WEIGHT

Yes, I know I’m skinny. But fortunately this is down to my genetic make up and relatively fast metabolism. Yes, I know I exercise a fair amount too, but trust me, I eat enough. Just look at the size of the cake below. The Whole30 encourages you to eat enough so that you are full and satisfied. It’s not about portion control or calorie counting. 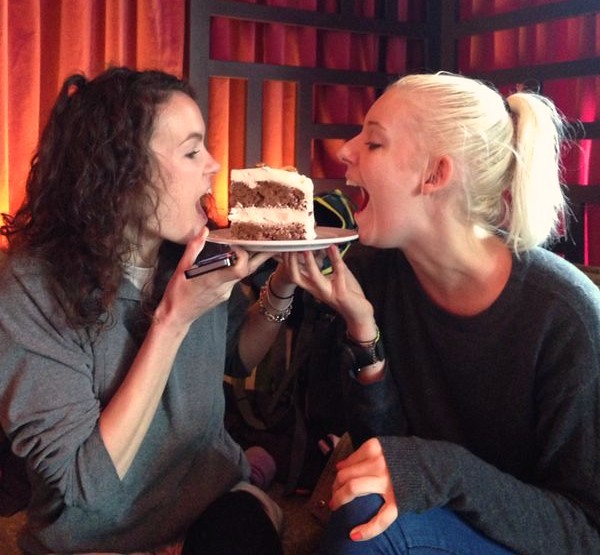 I’m going to remind myself of this too. I mean really, what’s a month in the grand scheme of things?!

IT DOESN’T REALLY AFFECT YOU, DOES IT?!

I’m not asking you do it. I’m just doing this myself, for myself. *stern face*

Okay, well unless you’re one of the handful of people who’ve already been trying (really hard – it’s hard!) to find a Whole30 compliant restaurant in London for when we will be going for dinner over the course of the 30 days, you won’t really be that bothered (other than being subjected to A LOT of posts on social meedjah, obvs).

I AM ACTUALLY QUITE EXCITED ABOUT IT

The other day at work, as well as eating my relatively wholesome breakfast and lunch, I ate a chocolate croissant, a chocolate cupcake and a 75g bag of Scottie dog shortbreads. I am constantly surrounded by food and have no concept of moderation. I am looking forward to experiencing the feeling of leaving the office not feeling bloated, sluggish and on a sugar low and/or high depending on when my last snack was.

So there you have it, from 10th June to 9th July, this is happening. It might do me good, or I might be in a 30 day grump. It might do both. But I’ve read enough and prepped enough already to know this is something I want to give a shot and I’m very interested to see what happens…

I will be posting updates here on the blog, as well as on my Instagram, Twitter and Tumblr. Join me for Whole30 fun!