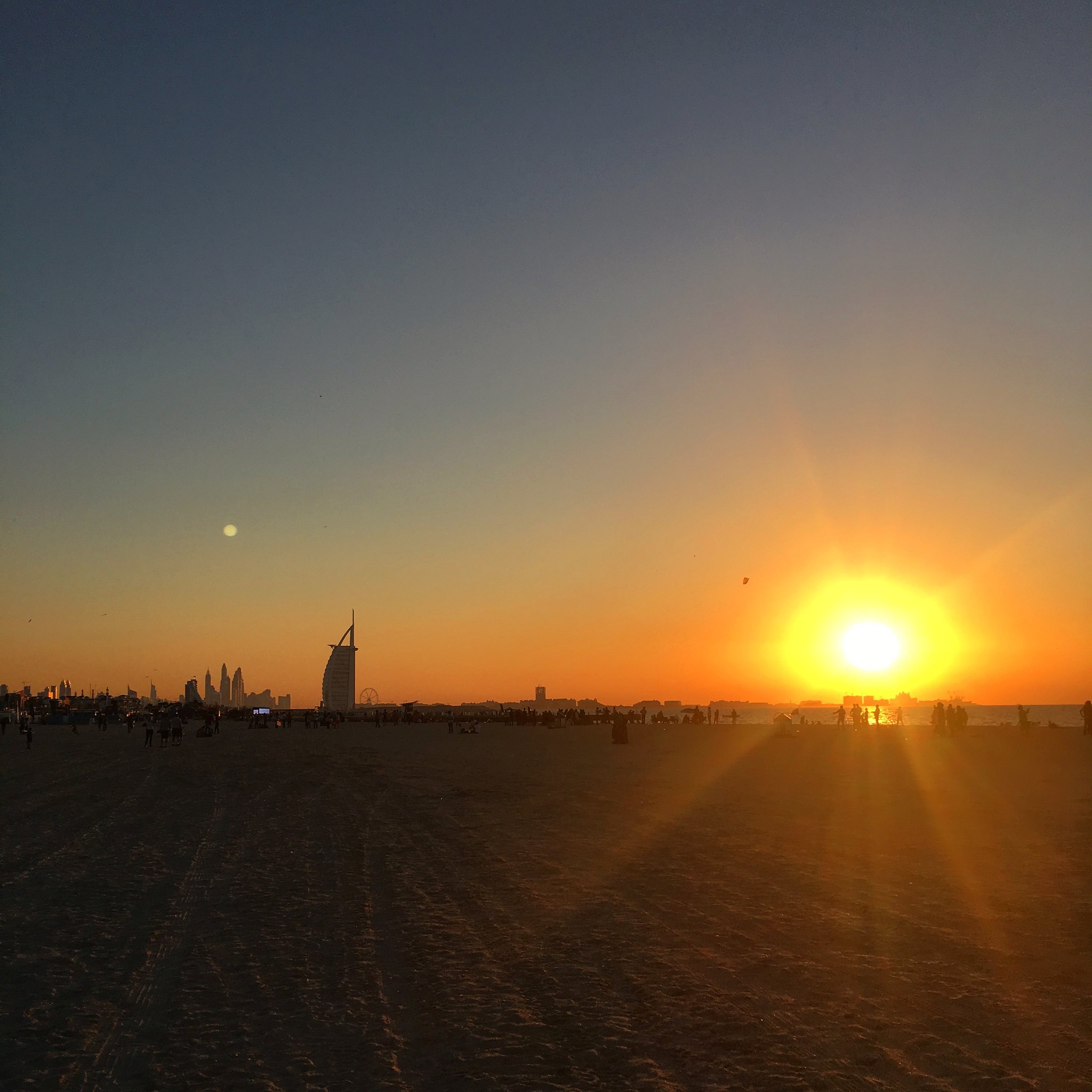 The last time I drank, it was a genuine effort on my part to have a ‘sensible’ one. It came at the end of a four week long stint of visitors, leaving dos, ladies’ nights and birthdays. I’d been drunk pretty much every Wednesday night through to Sunday morning for the best part of a month. I was done. I needed a rest. I really wanted to go to this birthday brunch, but I really did not feel like drinking – it was the perfect opportunity to put elusive moderation into practice.

Instead, after easing myself in gently by making two lager shandies last almost two hours (a feat whilst at a brunch, it must be said), I suddenly, out of nowhere, slammed my foot to the floor. From 7pm, memories get hazy. By 8pm, I’d knocked back several vodkas during a short stop-off at my friend’s apartment and I was in a taxi to a bar I barely remember being in. At 9pm, my one remaining sensible thought was that I needed to get myself home. Immediately. I fear that I thought I was being smart by leaving the night well before it got out of hand, but in reality I was already beyond gone.

The next morning, texting from my bed, my body aching with nerves and shame, my friend and I pieced together the rest of the night via time stamps, call logs and taxi change. There was my cab ride home that took 20 minutes longer and cost 30% more than it should have done. There was the call to the man I am still pining after, mere seconds of our six minute long conversation in tact in my mind. There was the text to the (very lovely, but not for me) guy I’d dated last year saying we should hang out again, even though (despite him being very lovely) I don’t really want to hang out again. Then, later that day, there was the last-minute appointment with a doctor to get antibiotics for a UTI – unfortunately that hour is crystal clear and was pretty painful.

It could have been worse. I’ve had worse nights and worse mornings. There was no vomiting. I woke up in my own bed, alone. I had all my belongings and there were no McDonald’s wrappers on my bedroom floor.

But this time, something clicked. Something that said, this is enough now.

And it’s getting in the way of the life I want to lead.

I was asked recently to close my eyes and describe my (idealised) perfect life. The home, the location, the job, the free time. None of my answer included spending my Saturday mornings hiding from the sun whilst my insides recovered from their latest battering.

Similarly, not long ago I reviewed my Dubai bucket list – a list I started shortly after moving here, which I’ve been ticking off and adding to ever since. It’s an interesting mix of day trips, outdoor activities and cultural experiences. Again, ‘get drunk and forget stuff’ does not feature once.

And so, I think I’ve come to the conclusion it’s time to give an alcohol-free life a go. I know moderation does not and will not work for me. I’m not saying I’ll never drink again. But right now, it’s easier for me to say no thanks than I’ll just have one. 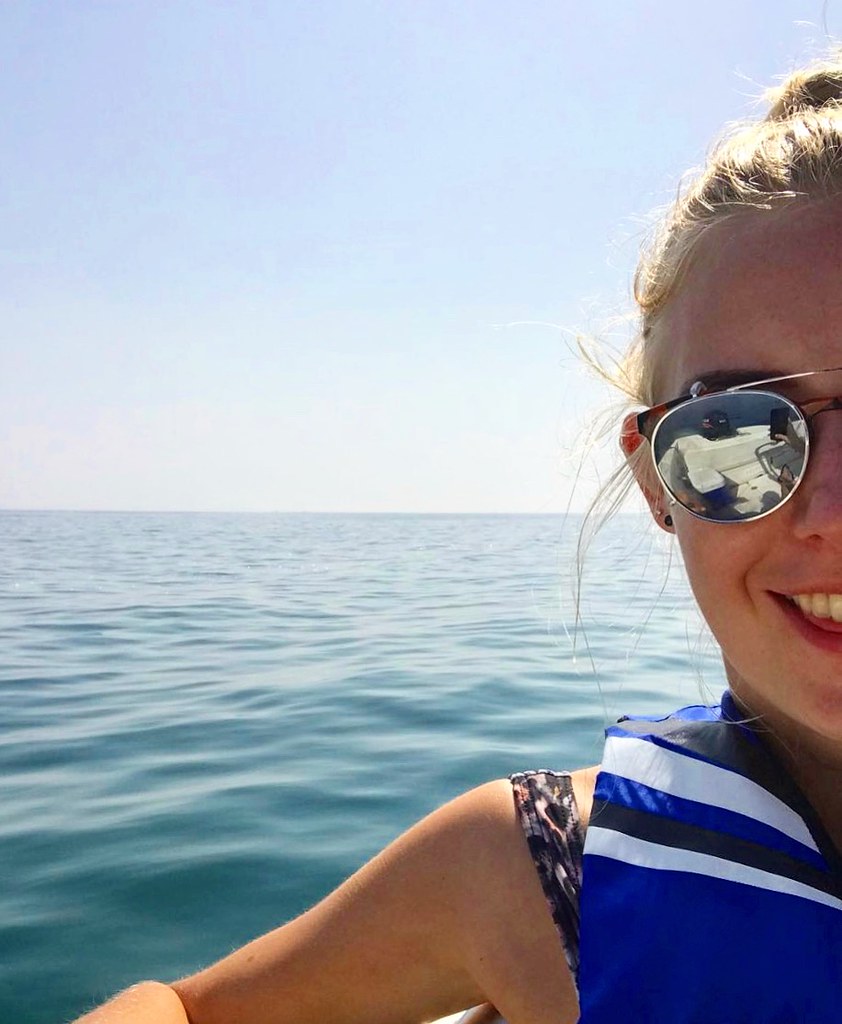 I’ve read a piece of writing advice a few times in a few different places recently: you shouldn’t write about something whilst you’re still going through it.

After harbouring a (not so) secret dream of becoming a dating columnist for gosh-knows-how-long, and after spending the last almost five years single and doing a lot of dating, it almost seems stupid that now, at this moment in time, I would decide to start writing about dating, when I am doing precisely… none of it.

Maybe that advice is onto something. Now that I’m not knee deep in it, wading through the bullshit ocean that is dating in 2018, I feel like I can reflect upon it. Really, I should have been writing about it all this time. Since my big heartbreak (I know, yawn), I’ve acquired tales of blind dates, Tinder dates, dating my friend’s friends, dating my own friends. Amazing dates, terrible dates and a whole load of mediocre ones too.

I’m the most single I’ve been in, well forever. You might think that there’s single and there’s in a relationship, but there really are fifty shades of complicated in between, and I’ve been madly trying to find that elusive spark with someone for a long time now. I still haven’t found it – at least not a long lasting one – and I’m kinda tired. I’m tired of the emotional rollercoaster I put myself through. I build up my hopes unattainably high and then struggle to pick myself up from the self-esteem blow when they are inevitably not met. I try to force emotionally unavailable men into an availability that due to location, or timing, or sometimes just their personality, does not exist. I. Am. Tired. Of. It.

I’ve deleted all trace of myself from all dating apps. I’ve stopped asking friends if they have anyone that they can set me up with. I am actively trying (and it’s really, really hard) not to imagine a date, a sleepover, a mini-break, a holiday, a wedding… with every attractive man I come into contact with. Call it crazy if you wish, I call it being a total, and sometimes totally flooring, romantic.

To continue with the (somewhat tenuous) water analogies, I’m starting to sail on calmer waters. I’m not out there surfing, trying to catch my next big wave. I’m sitting on my sun lounger, attempting to be content. Only when I am completely and totally happy being here, being myself, for myself, will I step back out there into the ocean. 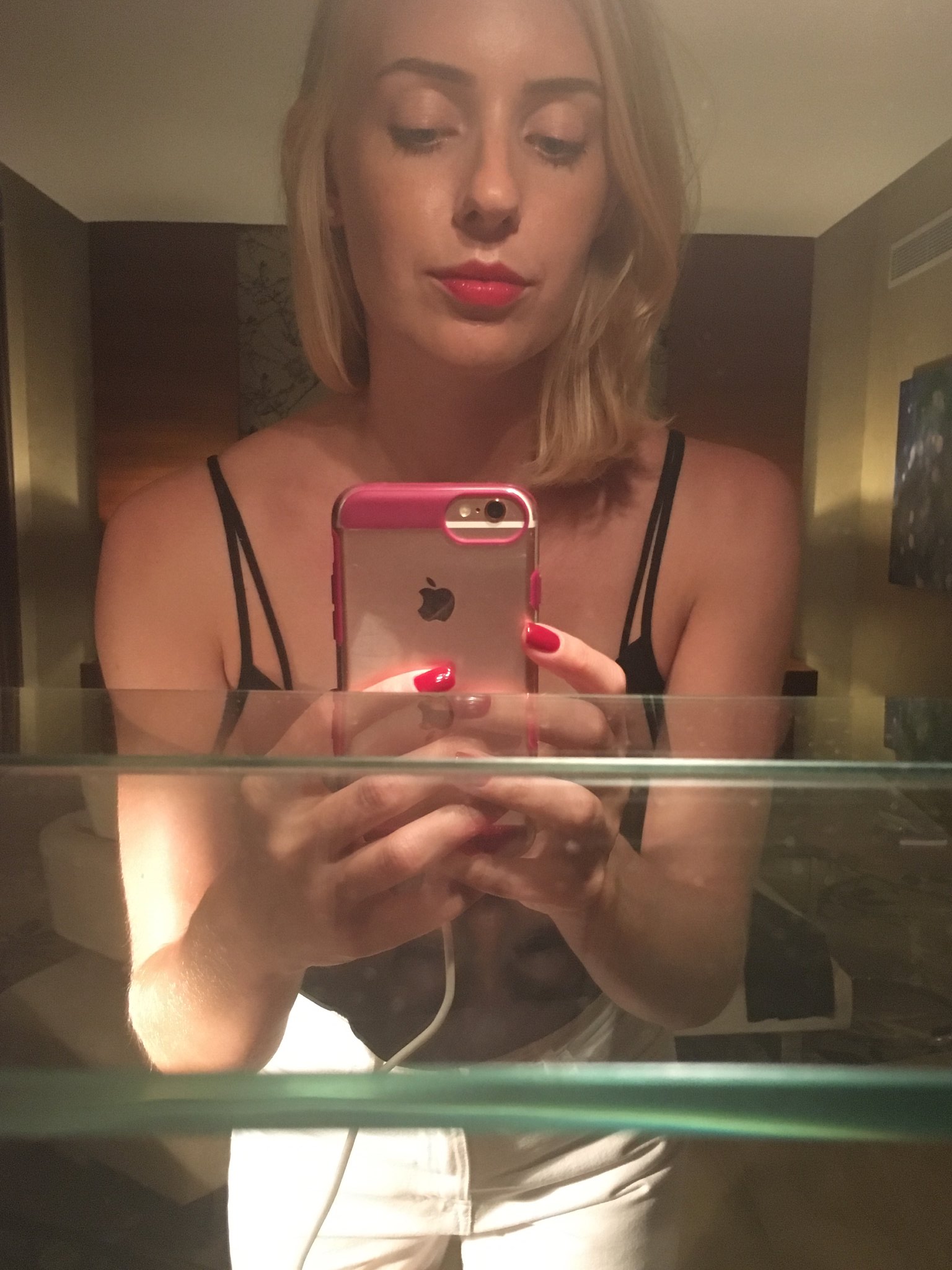 Last weekend I went for a roast dinner (my first one in Dubai!) with three women I met via a meetup group (more on making friends in a new town another time). We had all met at least one of the group a couple of times before, but this was the first time we’d spent any time together as this combination of four.

Conversation was ticking along pleasantly, and about an hour in, someone asked “so, who out of us is single?” It turned out, three of us were. I was really surprised – a 75% single rate is probably the highest I’ve found in any social situation I’ve been in in nine months. It feels like everyone in Dubai is married, or at least well on their way to be. In my late twenties in London, I was always aware that I was in the minority as a single person, but as a 30 year old woman in Dubai, I feel very much like the odd one out. Women my age don’t move here on their own. They move with their husbands – either following him a few months after he’s set up here or embarking on the adventure together. I’ve lost count of the number of times people have asked me who I’m out here with (I’m old enough not to need parental supervision), who I live with (just myself, and it is WONDERFUL), or even just as blunt as where my husband is (you tell me love, you tell me).

The relationship status question opened the floodgates. The usual topics of ‘why is Tinder so awful’, ‘why is Bumble such hard work’, ‘why are men so terrified of commitment’ (the constant million dollar question of anyone unlucky enough to fling themselves into the dating fire pit) filled the conversation. Turns out there are single men here, they just all sound they should be gracing the pages of Take a Break magazine. I kicked off proceedings with my most recent dating story, but it turns out ‘he was perfectly lovely for two months, then ran for the hills at the slightest whiff of a relationship’ pales into actually being quite pleasant when compared to:

The story of the guy who rescued the woman he was dating from a not-insignificant adventure sport accident, stayed with her in hospital, provided for her in the 2+ months she wasn’t working, persuaded her to visit him in Oman, then the day before her flight, ghosted her. Communication severed – calls unanswered, texts not replied to, just like that. Only to be spotted on Instagram a few weeks later enjoying a helicopter ride with his new beau.

The story of the guy who lied about his nationality, lied about his job… and even lied about the fact that he was going to pay half the rent of the apartment he was sharing with his girlfriend, effectively leaving her homeless at twenty minutes notice.

The story of the guy who entered a UK-UAE long distance relationship with a woman who was living here, introducing her to all his extended family via Skype (including his nephews), eventually leading (after a couple of years) to her being persuaded to quit her job and return home from the Middle East to be with him, only to discover that said nephews were in fact sons, and there was also a wife in the picture.

Wish me luck everyone, dating in 2018 is going to (continue to) be a bumpy ride! 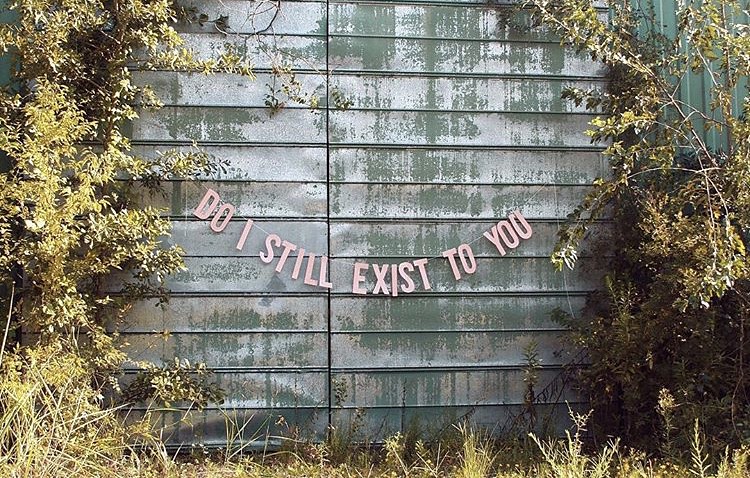 The ice cream in your freezer than he bought for you to share.

The extra towel hanging on the back of the bathroom door.

The address of his apartment in your Careem ‘saved places’.

The toothbrush head you gave him, sitting next to yours.

The Skyscanner search for the trip you were going to take together.

The bigger-than-normal bottle of milk in your fridge, now going to waste, so you could both have tea at the weekend.

The reservation reminder in your inbox for the dinner-with-a-view.

Image in this post from the Abandoned Love series by Peyton Fulford, see more on her Instagram.

There is no happy ending to this little trilogy, as much as I fought for there to be. But there’s no battle to be had if the other side doesn’t want what’s at stake.

Three years after my big break-up and out of nowhere in the Soho night, I found someone that made me want to give up being single. Because that’s how I look at it now – it’s not just about finding someone I want to be with, it’s needing to find someone that I’d give up being with myself for.

Three months of hanging out in London, before I hopped on a plane to the desert. Then three and a bit more months of near constant texting, hours and hours of Skyping, way too much sharing of my most inane thoughts, and a few weeks of planning an awesome adventure followed, and we then met in neither of our new homes to spent a week in each other’s company in the incredible Sri Lanka. I fell head over heels in love with that country, and quite a lot with him too. In a whole seven days, we spent only an hour or two apart, and I desperately held onto every second. Maybe too desperately.

He didn’t, doesn’t and won’t feel the same. I was willing to throw my energy into making a (admittedly, quite ridiculous) long distance thing work. He was not. I initially thought it was because I was being too romantic and he was being too practical. That this was meant to be, that it was just damn logistics getting in our way.

The real kicker came when I realised it was nothing to do with the time difference or the annual leave or the cost of flights or any of the other hundreds of reasons why a really, really long distance relationship is a terrible idea. He didn’t want me. And that’s how it ends.