Nakedness has been a topic of discussion between myself and several friends over the past few weeks. It turns out I have quite different views to (what seems like) most people. So I thought I’d open it up to be a bit of a debate. Me vs Steph. Let us know who’s corner of the changing room you’re in… 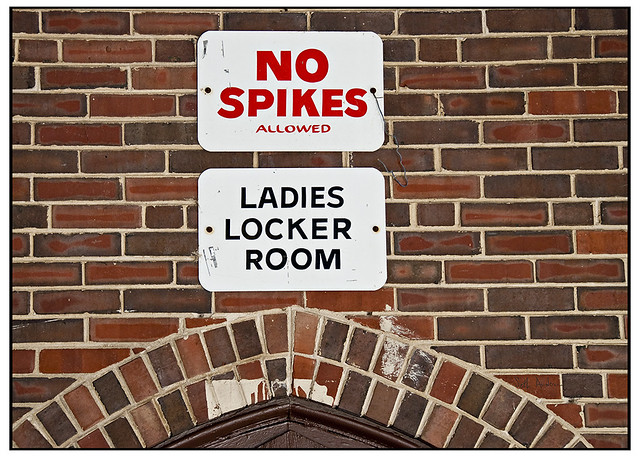 I have a question. It’s been bugging me for a while. And then I started cycling to work and using the changing and showering facilities almost everyday in the basement of my building and now I really just don’t get it.

Why is being naked so awful?

Our changing room, like many others, is full of grown women of all shapes, sizes and ages, dashing from cubicle to cubicle, doing the ‘trying to put underwear on without dropping the towel’ dance and just generally avoiding eye contact like their life depended on it.

We have three showers that are in self-contained cubicles and four showers that are open plan. Every morning, there is a queue for the three closed off showers, whilst the four others stay unused. The same thing happened recently on my first visit to Cyclebeat. Eight showers – six open, two cubicles. And a queue which I was able to breeze straight past as long as I didn’t mind a couple of people seeing me shampooing. Fine by me.

I’m not suggesting we all need to wander round flaunting it in each other’s faces, but it makes me sad that we’re regressing to feeling like we are 14 again and changing after a PE lesson. Especially as these are all people who have just run or cycled into the office, or have just finished a workout in the gym or studio next door.

I asked my male colleagues what happens on their side of the wall. The shower set up is the same, and all of them get used. Apparently everyone is a lot more ‘matter of fact’ about it and they just get on with what they need to do. Need to put their towel down to get dressed? Done. Need to be at their desk in 20 minutes so don’t have time to faff around trying to cover up? So don’t bother.

For now, and until I have an answer, I’m just going to carry on being the only weird one that walks past the queue and uses the shower without a door.

I’d just completed a tough 45 minute work out, I was sweaty, tired and hungry and ready for a lovely shower. I walked into the ladies room, put my bag on a hook and looked around for the changing/ showering cubicles.

Then I heard the showers and realised that the other ladies by the six hooks were already stripping. Heat rose in me, bile started in the back of my throat and my head filled with stressful thoughts.

My dreams of a lovely shower were replaced by flashbacks of school, knowledge I would have to rush my shower and realisation that the complimentary towels barely covered by foof and boobs at once filled me with fear.

Don’t get me wrong I’m okay with getting changed in front of my friends, I’m not a complete prude. I just like my privacy, especially with strangers/acquaintances. A shrink would take me back to school where I had enough ammunition for the bullies that the possibility of my body looking different (it wasn’t) was enough to put me off PE and communal changing for life.

So far this has all been about me, but if there had only been me in the room I would have coped with open showers. Having to squeeze past others to get into/out of the showers, having to look at the floor whilst getting ready and having to put my contact lenses in/makeup on next to the lady that dries her hair naked in public made the whole the thing much worse.

I’ve never used the showers at a gym either, I always go home/to work and use a private shower. An added bonus is that I don’t have to lug all my stuff around.

Trying to rush, get my undies on under the towel and finding anywhere to put my things amongst the naked bodies in the under provisioned changing rooms resulted in me heading to work as a stressed, sweaty mess with wonky hair and clothes. I might as well have not showered at all.

Maybe it’s just me and my issues but when I am paying £16+ for a class I don’t want to have to go through a stressful experience every time. Places like Boomcycle have it right where there are beautiful big towels individual cubicles where you shower and get ready before facing the world. Because of these facilities I can enjoy my class and the rest of my day with no stress, well except for when I forget my bra, but that’s another story.